ONLY the American people can Redeem America from the Federal Reserve Banks. Fortunately, a statutory Gateway to Equity for the redemption of the property has been uncovered. Redemption of America is of the greatest necessity NOW!

The ‘Pledge’ of FDR’s 1933 New Deal became a mortgage on the property and labor of the American people. Operating more like an unlimited line of credit the mortgage has no sum certain or balance in fact but is ever increasing and rapidly becoming unsustainable. The United States has operated the affairs of our nation under a national banking emergency (receivership) for over 85 years, administrating our affairs into a $21 Trillion debt, and not once has anyone offered a plan to resolve the national emergency and emerge from receivership. 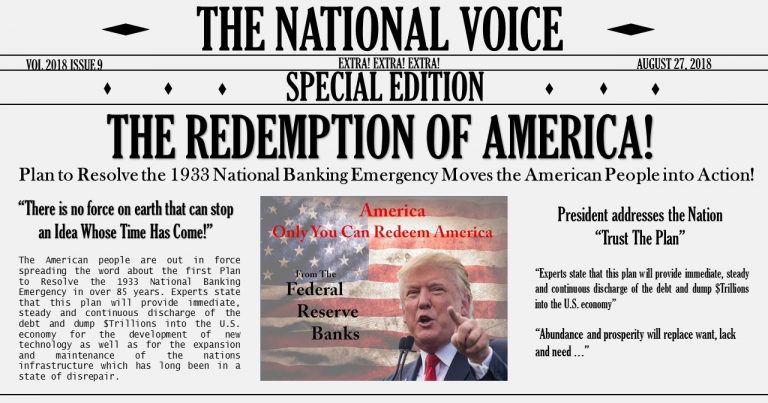 Fortunately for America, congress authored and set in stone, over 100 years ago, a statutory process for redeeming America from the Federal Reserve Banks. Embedded within the Trading With The Enemy Act, TWEA (the source of our issues today) is the step by step, detail by detail process. Embedded within TWEA is a statutory Gateway into Equity jurisdiction and a true remedy for America. TWEA mandates the venue and jurisdiction as well as the Conditions Precedent for gaining STANDING.

TWEA Sec. 4307 states that: ‘The sole relief and remedy of any person having any claim to any money or other property conveyed to the Alien Property Custodian, …. shall be that provided by the terms of this chapter.’

That’s right! TWEA states that the Custodian of the Alien Property has the same power and authority as a common law trustee, and as such is directed to pay the Net earnings, (including dividends, interest, annuities, and other earnings), for the use of your good faith & credit. These funds already exist as asset funds that cannot be distributed via the Federal Reserve Banks.

TWEA states that the American people have a beneficial right to a ‘full acquittal and discharge of all charges whatever” as a set off against the net earnings which the Custodian is directed to pay.

TWEA states that one must fulfill all Conditions Precedent in order to gain STANDING to access the set off funds. TWEA further provides you all of the necessary conditions which must be fulfilled to gain STANDING.

The Redemption of America through the TWEA Gateway will provide America:

Along with our property and labor, the American people assigned/conveyed our sovereign authority to the Custodian of the Alien Property who wields it like a mighty on behalf of the Federal Reserve Banks.

The Federal Reserve Banks cannot stop the redemption of America once President Trump signs off on our claims and orders Treasury to release and return the blocked funds to the people.

In the Interest of the United States

We ask that you sign our Petition telling President Trump that the Redemption of America is in the interest of the United States.     http://the-national-voice.com/